Step back in time with the Dutch Milliners as we transform into the Landrum sisters, proprietors and teachers at the Landrum Ladies Academy at the 2019 Jane Austen Festival hosted by the JASNA – Greater Louisville Region.

Our workshop aims to round out the immersive experience of the Jane Austen Festival by teaching participants how to navigate polite society by making introductions and good acquaintances, demonstrating the skills and abilities needed to be considered accomplished without looking like Mary Bennet, knowing the in’s and out’s of this social hierarchy, and why all of this craziness was crucial to the success and livelihood of many unmarried women in want of a single man in possession of a good fortune. Each workshop will run for one hour and thirty minutes and both will cover the exact same material and include the same experience regardless if you choose workshop Part I or Part II. 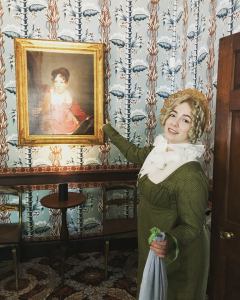 Esther Catherine Landrum was born in Chelthenham, her father the proprietor of the George Inn a well established coaching inn on the road to Bath. Coming from a genteel family she was sent to school in Bristol as a young girl where she became known as an accomplished singer and pianist. She returned home at the age of 17 after the unexpected death of her father. It was then that she begin to receive pressure from her older brother to find a suitor and settle down. After many unsuccessful attempts to marry her off he finally resigned to the fact that as long as the inn was prosperous she would not be a burden. 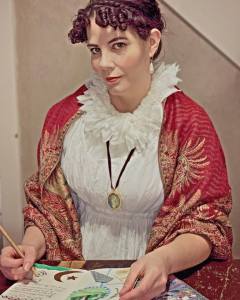 Lydia Maria Aldridge Landrum was born in Bristol to a family with no particular fortune and only their name to recommend them. Her father inherited their meager estate and a pittance which allowed them to live in some comfort. Her aunt took pity on their family and agreed to pay for her schooling in Bristol as they could not afford the tuition for both her and her older brother. Upon returning from school she soon made the acquaintance of Thomas Landrum, a schoolmates brother and young officer in the Army. They were wed and soon she was moved to her new home in Chelthenham.

In 1812 the news came of Thomas Landrum’s death and the Landrum ladies were left with an uncertain future. Advised by their lawyer, and close family friend, the ladies agreed to sell the George Inn to Mr. E. Hughes in 1813. They received a substantial sum for the bustling inn and moved to Bristol where they later opened the Landrum Ladies Academy to teach young girls in the town and pad their modest income.

For more information on the Jane Austen Festival and how to purchase tickets for the event and workshop please visit http://jasnalouisville.com/2019-jane-austen-festival-info